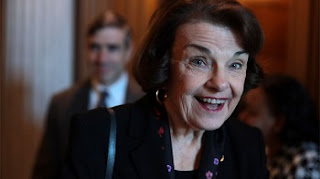 This woman has at least 58 million reasons to be smiling.

Read this first or afterward: California Transformed, Part 1. At least read it before commenting.

You may have noticed that I don't publish as many Da Tech Guy Blog posts per month in 2020 as has been so in previous years. That's because of California Assembly Bill 5 (AB5), which went into affect on January 1st and remains in affect even during the Wuhan Virus Pandemic and the subsequent lock-down.

I have been saying for months, years perhaps, that the goal of the California Organized Political Left is to drive out the middle class and, between the California Assembly, Newsom, and Los Angeles Mayor Eric Garcetti, and the LA County Board of Supervisors, I've never believed it more than I do today. And middle class I don't just mean those who earn a certain amount of money; it includes those who have the potential to independently increase their earnings.

My conclusion: CA's Organized Left wants to keep the illegals, the unskilled poor, and the homeless -- a slave class and is driving all others out. Oh and they want the rich to stay, too, because that's where the tax money will come from -- unless it's one of those rich people like Elon Musk, who hasn't been subject to getting his "mind right."

With each of these entities doing their part to make it illegal to work outside the home and capping earnings on those of us who choose to work at home as independent contractor, what other logical conclusion is there?

Back to AB5 specifically, before January 1, 2020, I published at least two posts per week at DTGB -- 104 per year. According to this law, however, now I can publish no more than 35 posts per year for DTGB or any other client, else California can sue the client.

Yes, really. Right now, the post count over there is at 20.

So I will be doing most of my work here at my own site. Good for me, sure, but it will hinder Peter Ingemi's project at DTGB: Da Magnificent Seven, which I have been happily a part of since its inception in 2013.

It’s like this. If the public believes that the president is just in it for himself and there is in actuality no pharmaceutical cure, they will be willing to accept a more radical cure — like changing presidents.


ADD is much a more virulent virus, if not as deadly. Usually.


“Made in China” used to be a joke. It still is, but it’s not a funny one anymore.

We Californians who pay attention knew much of this about Feinstein.

Every Tuesday and Saturday, I blog at the award-winning DaTechGuyBlog. Latest: OG Fascist.

When you hit the Tip Jar, it helps pays for: A Roof Over My Head, Food, Gasoline, Car Insurance, the writing of My Next Book(s), and Utilities--especially Internet and COFFEE! Yes, coffee is a utility.
Posted by baldilocks at 1:29:00 PM