Donald Trump will be the president of the United States in January. It's still weird to say. Liberals and Leftists are not taking it well, though.

Leftists sat back and laughed while President Obama overstepped his presidential boundaries over and over again. The Democrat Congress approved of it each time, of course, and, later, the Republican Congress was too afraid of being called racist to do its job and keep executive power in check.

Rest assured, President Trump will be well reined-in by the legislative branch, even though he has a Republican Congress and here's why: Trump has the same Congress that was afraid of being called 'racist' by the Left for opposing President Obama. Governmental Republicans are afraid of the Left, period, and the Organized Left knows this.

So it is that the Organized Left planned these anti-Trump riots just like it has been doing with almost every other riot in the last half century. The purpose: to keep the fear stoked, among regular people and among the hired help--the politicians.

And, as easy as is for the Organized Left to plan riots, it's piece of cake easy for them to pay a few of its operatives to float the assassination attempts on Twitter—especially since Twitter has not been shy about making its biases known. Twitter allows the operative-created assassination attempts, which emboldens the non-operatives and there you have it.

A free-float storm of a Leftist-created temper tantrum.

Republicans in government see this and wonder “what can we do to show them that we aren’t going to hurt them?” That's the pattern since 2000.

Will Republicans break this pattern?

BTW, the day after Election Day, I had a leftist acquaintance haranguing me about the alleged violence on the right. She doesn't have a thing to say to me today. 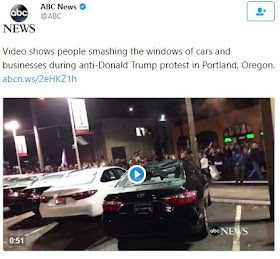 Welcome, Glenn's readers and thanks for the support and the commentary!

Every Tuesday and Saturday, I blog at the award-winning DaTechGuyBlog. Latest post: Quiet Day in the Neighborhood (updated 11/12/2016 4:00PM PT)

I have reverted to Paypal on my blog posts for reasons of longevity and because it is easier to access funds--I have a debit card. (You may remember that I did not like what Paypal did to Charlotte, NC.)

If you want to use another method, see my left sidebar.

I reserve the right to delete foul comments and those of obvious trolls. Alternatively, I may creatively edit them. You're welcome.