Last Chance to Buy My Novel in Dead Tree Form

Paperback sales of my novel end after tomorrow. Call it "indefinite hiatus."

It’s really difficult to get people to buy your wares. It's easier to get people to donate. I've had people donate a lot of money to Baldilocks and, don’t get me wrong—I’m very grateful for it and won’t turn it down…and you do get something for those donation: keeping my blogging afloat.

But, I’d rather get paid for something I’ve finished creating. It feels better. I'd like to sell 20 today and 20 tomorrow. Then, I will be done with selling that particular book for a while, at least online.

Also, there has to be someone out there looking for a novel on which to base a screenplay. Certainly there is.

Buy my book and give it to one of your screenwriter friends.


Every Tuesday and Saturday, I blog at the award-winning DaTechGuyBlog. Latest post: Hands-Up, Don't-Shoot, European Style.

Today, on Social Media, I requested that my friends and followers submit writing topics to me. One of the suggestions was the difference between African immigrants and black Americans who are descendants of American slavery.I’ve glanced against the topic before, when making other points.The Herding, Part One:


Take everything we know about the history of Americans of African descent piece by piece. Our West African ancestors were sold into American slavery—mostly at the behest of other black Africans. Upon arrival in America, they were forbidden under pain of death, to speak their native languages or use the names with which they had been born. Unlike all other immigrants to America, the African slave was forcibly cut off from these vestiges of the Old Country--essentially the slave became a new creation. The American descendant of American slaves is, thus, wholly and deeply American.

Of Japan and New Orleans: Honor, Shame and Identity:


[N]ames, languages, family structures, belief systems (…) have buoyed all other ethnic groups—including recent African immigrants—in their sojourn to this country and all of them had the choice to hold onto the elements of their cultures that fit into the American ideal and discard those which were incompatible. American slaves were granted no such luxury. Our ancestors were emptied of their identities and re-created in the image of what America had for them. And, up until roughly fifty years ago, much of that image was molded by oppression and scorn.

However, most black Americans held on tightly to the universal totems of personal and communal honor: love of God, family, love of community, industriousness, self-reliance--all of which also flow and follow from America’s founding document. (That America strayed away from those principles with respect to black Americans isn’t the point, that those principles even existed is. And, with those concrete principles in hand, black Americans were able to point to them and say to other Americans, “live up to your—to our-- principles.”)

What we saw in New Orleans after Katrina was a microcosm of the character disintegration of this most American of Americans. It wasn’t born of DNA nor of the historical effects of slavery; it was born of the wholesale abandonment of a character tried and refined by fire and of the principles which held black Americans together in prior times of adversity.If mother and father don’t love child enough to at least try to create the most tried and true environment for the nurturing of that child, it follows that neither mother, nor father, nor child will love and respect neighbors or community. We declined en masse the prescriptions and proscriptions of God regarding the family and allowed government to usurp the place of the head of the family--the husband/father/leader/protector. We abandoned the identity which our forebears shaped for us and put chaos in its place.

As is obvious and as one might be able to infer from my own heritage—being the 55-year-old (next month) offspring of an African immigrant to America and an American descendant of American slaves--I’ve had plenty of time and reason to give the topic a lot of thought. I don’t think that many think the circumstances through far enough, which makes for a lot of animosity between black Africans and black Americans.My earlier observations point to several factors for the differences, some of which are common among African, black Caribbean immigrants, and other immigrant groups:
Aside from those observations, there are others to consider.My father came to America in 1959 via the Mboya Airlift. His group of several dozen gifted students was the first large-scale immigration of black Africans since the end of the Trans-Atlantic Slave Importation. (For the record, the U.S, importation of slaves was outlawed in 1807, but there was still a huge black market—no pun intended—up until the Emancipation Proclamation.)
After the Civil War and before the Johnson-Reed Act of 1924, only a bit over a thousand black Africans immigrated to the USA, the dearth of which was due to the lack of financial resources among most black Africans at the time. The Johnson-Reed Act tamped that number almost down to zero. (It’s interesting to note that this law banned Arab and East Asian immigration outright and that it was a codicil to the Emergency Quota Act of 1921, which was aimed at Southern and Eastern Europeans. I’d like to investigate the effects of those restrictions with respect to Eastern Europeans who were looking to escape Ataturk, Hitler and Stalin in that decade and those following.)But, subsequent to the Mboya Airlift, the restrictions on black African and other non-Western European immigration were eased in 1965.The timing is significant and is the point of this singular observation. African immigrants are indeed the go-getters from among their fellows, but they also began to arrive in America at the right time—when race was becoming less of a factor for all Americans and legal residents who were willing to grab hold to the American dream. One might also note that the moral and societal re-enslavement bait to black Americans was cast at roughly the same time.Here’s something which just occurred to me today: the underlying assumption that black Africans should be similar in ability and behavior to black Americans is that black African heritage confers a DNA-level inferiority on all of us as compared to other groups.If it were true that black African-descended persons were genetically inferior to other groups, then it would not matter that African immigrants were the go-getters from among their various tribes. They would still tend to display intellectual inferiority to other immigrants and, indeed, be intellectually inferior to black Americans, since, roughly 80% of black American descendants of American slavery—including me--have some European heritage. But that does not appear to be the case.Survey Shows Black Immigrants are More Educated, Make More Money than African Americans (sic)

I have repeatedly pointed to the grave damage done to black Americans by the Great Society Programs and all of its evil progeny, but here’s the one which I believe is the most significant: lack of identity.Most things labelled as identity are extremely dangerous, and feed on hatred of other identities, but, as I pointed out in my essay about Japan and New Orleans, the dearth of a core identity is just as dangerous in that pointless and evil identities are waiting to fill any such voids. Africans and all other immigrants come to America with their core selves intact and that is what drives most of them, in my opinion. That core self is often culturally-based, but it has an even more important foundation: family honor.Do I need to go on—again--about what has happened to family honor among the vast majority of Americans who are black? I didn’t think so.We all know about the pseudo-Africans--those black Americans who seek to cobble together African identity for themselves; indeed, that's what the creation of Kwanzaa is about. I have occasionally made sport of pseudo-Africans, mostly because I can, but, as I've thought through and composed this essay, I'm feeling less haughty and more inclined to point my identity-less American brethren to a true identity solution:Create a family, be loyal to and accountable to it. That's what pushes our African immigrant friends further than almost all others.And, it's a solution which we can fashion for ourselves. That goes for all Americans...at least for now. Seize the Time.


Every Tuesday and Saturday, I blog at the award-winning DaTechGuyBlog.
Posted by baldilocks at 5:28:00 PM No comments:

Melvin, Malik, and Tale of the Tigers

This photo gets posted a lot on my Facebook newsfeed. 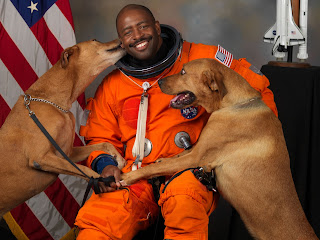 It is NASA astronaut Leland Melvin and, like most others, I’m charmed by his love for his furry family and their love for him.

But, after reading Melvin’s biography, I’m struck by something else. He went to college on an athletic scholarship—football—but he did not take the easy route while there. His undergraduate degree is in chemistry.

Melvin was drafted in the NFL, but chronic injuries ended that career. But he had another avenue available to him, which resulted in his being a crew member of two missions of the Space Shuttle Atlantis.

There are several reasons that Mr. Melvin’s story fascinates me, but I want to mention just one.

On the cover of my novel, Tale of the Tigers, you see three people: the main characters, Kevin and Felice, and a third person: Malik. Malik is probably my favorite creation, but I didn’t just conjure his personality and persona out of thin air or wishful thinking. I made him athletic, handsome, and brilliant because I have known many black men like him. Men who are gifted physically, but most importantly, intellectually. They are black, but they aren’t the sort of black men who are featured in the news. They aren’t “news” because they are good men who are content to use the gifts which God gave them to thrive in the greatest country available to people of all races, with the gifts being interior rather than exterior.

I’m always fascinated by black people who become well-known outside of something intrinsic to race.[i] I suppose that’s an irony, but it’s true.


[i] When I used to watch Fox News, I used to love seeing Neil Tyson deGrasse for this reason. Sadly, he has ruined that for me of late.

Every Tuesday and Saturday, I blog at the award-winning DaTechGuyBlog. Latest post: Watching the Build-Up.


Every Tuesday and Saturday, I blog at the award-winning DaTechGuyBlog. Latest post: Lawlessness Flexes Its Muscles.