[A]s I was reading, it occurred to me that even if the Democrats get everything they want on Tuesday, they won’t be satisfied. Why not? Because Donald Trump will still be there as president of the United States, with all the authority inherent to the office, and with none of the fear of George W. Bush.

Not Your Marker's Mark


Leaving aside the biblical prophecy about the Mark of the Beast, how alarming is this? One wonders what will be the outcome of a malfunctioning chip. How will a person’s body — and mind — react to that?


Admittedly, having a plain-spoken, abrasive president was jarring to me at first. Then I began to think back on the last two presidents, both pathetic blowers of backside smoke from the two “opposing” parties lulling many of us to sleep with their sweet dulcet tones.


And why would Andrea Mitchell “accidentally” mislabel Brenda Snipes as a Republican? Because Snipes has a long reputation in her office: a history of controversy.

[T]rolls feed you. Look for inconsistencies in troll comments and exploit them. Trolls are stupid and, therefore, will always provide you with your own rhetorical ammunition.


Leave it to a Democrat politician to creep us all out.

A Tad Rant-ish About Affirmative Action


My American parents – my mother and “step” father – have always been against AA because they could see the unspoken implications of it: that blacks needed it because we are allegedly inferior to other groups.

Make Them Push You Off the Battlefield -- Linked by Instapundit, Ace of Spades HQ, and many others.


[T]he fact that Twitter sees fit to take out the high rolling personalities — like my friend, Thomas Wictor, who was suspended in September, IIRC — shows that the Left is afraid.


[W]hen I read that he had called for the destruction of Israel, I wasn’t surprised in the least.

When you hit the Tip Jar, it helps pays for: A Roof Over My Head, Food, Gasoline, Car Insurance, the writing of My Next Book(s), and Utilities--especially Internet and COFFEE! Yes, coffee is a utility.
Posted by baldilocks at 12:53:00 PM No comments:

The Left Worships Your Mamma


Recently, Former President Obama said that the Right has "mommy issues" because many of us don't believe in the doctrine of Climate Change. Resisting the urge to talk about the former president's mamma, I'd have to say that inserting "mommy issues" into that conversation (Mother Gaia?) was bizarre. And it reminded me of something I've seen the Left do quite a bit lately: bring up your parents.

One of the Left’s shaming tools used against conservatives -- especially those who are not white -- is appealing to us in the name of our dead ancestors or, rather, their vain imaginings of who our ancestors were and what they might think of what we, the living, think and do. Example: 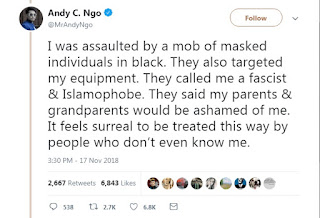 This appeal is based on an unexamined delusion: that all non-whites give a rip about pleasing our ancestors.

I, for one, have at least two ancestors who probably had more to worry about upon reaching the afterlife than whether I or any of their other progeny were shaming them or not. But that’s a side issue.

The main one is this: Christians and Jews are strictly forbidden to practice this or any other form of idolatry. This would include appeasing them or ordering our lives to what we think they might want. Simply put, our goal in life is to please God and Him alone.

Also, I think that trying to atone for the actions of one’s dead ancestors – something the Left seems so on about, what with all the obsession with about “white privilege” and the various campaigns to refute and repudiate “whiteness” – is a twisted Leftist form of this.

They hate their ancestors, worship mine – or so they think -- and then try to shame me when my political beliefs don’t match up with what they conjure about the gods they venerate.

They're always trying to put something in that God-shaped hole of theirs -- anything except for the actual God.


Every Tuesday and Saturday, I blog at the award-winning DaTechGuyBlog. Latest posts: Moral Preening App.

When you hit the Tip Jar, it helps pays for: A Roof Over My Head, Food, Gasoline, Car Insurance, the writing of My Next Book(s), and Utilities--especially Internet and COFFEE! Yes, coffee is a utility.
Posted by baldilocks at 2:44:00 PM No comments:

As I mentioned here, I used to be a huge NFL fan but stopped paying attention many years ago, beginning long before the kneeling controversy. However, I couldn’t help but notice this, especially since it appeared on Drudge.


Washington Redskins quarterback Alex Smith was lost for the season on Sunday when he broke his tibia and fibula on a scary, freak tackle by J.J. Watt and Kareem Copeland. Smith, who was immediately in devastating pain, was quickly carted off the field and was reportedly headed to surgery just minutes after his team’s comeback bid fell short.

Anytime a quarterback breaks his leg on the field, NFL fans of a certain age think of former ‘Skins quarterback Joe Theismann, who suffered a gruesome broken leg during a Monday Night Football game in 1985. (…)

Joe Theismann broke his right tibia and fibula on Nov. 18, 1985 in a game in Washington that ended 23-21. The only three-time Defensive Player of the Year Lawrence Taylor was involved in the injury, which occurred around the 40-yard line.

Alex Smith broke his right tibia and fibula on Nov. 18, 2018 in a game in Washington that ended 23-21. The only other three-time Defensive Player of the Year J.J. Watt was involved in the injury, which occurred around the 40-yard line.

People who read this blog will not be surprised that I’m fascinated by these types of “coincidences,” since my own being is an eerie parallel – and, in many ways, polar opposite – to that of one Barack H. Obama.

There are too many other "coincidences" to name here, the most famous being the parallels between the assassinations of Presidents Lincoln and Kennedy.

My own belief about this is that the world we live in is a fallen version of the orderly one that God created and there are still patterns in it. God can and does enter in to these patterns if we ask and even if we don’t.

But even if one does not believe in an omniscient, omnipotent deity, these types of rhyming and flowing events and on-going stories serve to make ridiculous the idea of a random universe.

I think that, sometimes, God just sits back, let’s them happen and lets observers make of them what we will; draw our own conclusions.


Every Tuesday and Saturday, I blog at the award-winning DaTechGuyBlog. Latest posts: Troll-Feeding and You.

When you hit the Tip Jar, it helps pays for: A Roof Over My Head, Food, Gasoline, Car Insurance, the writing of My Next Book(s), and Utilities--especially Internet and COFFEE! Yes, coffee is a utility.
Posted by baldilocks at 5:47:00 PM No comments:

Three months -- August through October. Finally got around to it. I took a few days off from writing at Peter's place because of my Road Trip. I still owe you all a post about the trip. I'm glad it was made.

Why You Should Believe Very Little of What You See 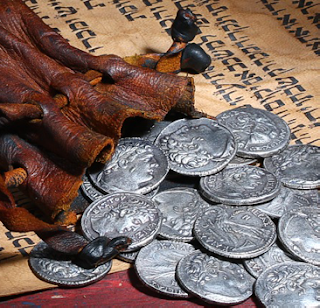 Taking it to the Street

True Nature of the War on Men

The Leftism or The Lunacy?

Gates Dreams of an African-less Africa

Who Started This Caravan?

Beset But Not Bowed


Every Tuesday and Saturday, I blog at the award-winning DaTechGuyBlog. Latest posts: Florida Woman.

When you hit the Tip Jar, it helps pays for: A Roof Over My Head, Food, Gasoline, Car Insurance, the writing of My Next Book(s), and Utilities--especially Internet and COFFEE! Yes, coffee is a utility.
Posted by baldilocks at 6:19:00 PM No comments: