An Impeachment Spectacle is in Our Future and It Will Be Glorious! 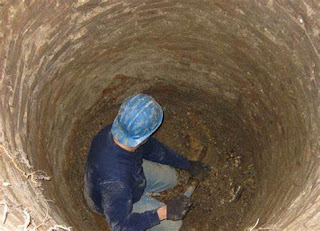 My commentary on the Mueller statement. Originally posted as a Twitter thread.

Mueller resigns as Special Counsel and said that he won't testify in Congress to anything about the Russia Probe beyond what's in the report. But Adam Schiff wants him there anyway.


Pelosi and Schumer don't want an impeachment, period. The following is just subterfuge.

"The case has to be very compelling to the American people." https://t.co/gbjejBorhT pic.twitter.com/sV8yKuKIhT
— ABC News (@ABC) May 29, 2019

Real reason: an impeachment will expose information to the public that will hurt the Democrat Party.

They'll keep hoping to reach that Pot of Gold at the bottom: Trump removed from office in disgrace.

Pelosi and Schumer are smart enough to know that this is not what's at the bottom of the hole which dimwits like Schiff keep digging.

They know what really is there: the corpse of the Democrat Party.

I bet that President Trump has already explained it to the party's leadership.

What remains to be seen: whether Pelosi and Schumer can hold off the rabid impeachment mongers in their party and among their constituents. I predict that they won't be able to withstand the storm.

Like all other types of mobs, the impeachment mob cannot be reasoned with. They want destruction and they want it now. Try telling any mob that the destruction it plans for its adversary will be cause of its own destruction -- and the mob will scoff and keep it moving.

Therefore, I say that we sit back and let the Democrat Party destroy itself.

Let the impeachment happen so that all the declassified info can be on the table -- which is what Pelosi and Schumer definitely DO NOT WANT, not to mention Hillary Clinton and Former President Obama.

And Big Media will have no choice but to cover it. They'll be live-streaming it. Regular Dems will be having impeachment watch parties.

And so will everyone else.

We will all be able to hear the particulars of how the Organized Left tried to steal the 2016 presidential election. No one will be able to ignore it.

That's what's coming if the Democrats refuse to give up this years-long temper tantrum.

So, come on with it, Dems! Ignore the Speaker and the Minority Leader. What do those fossils know anyway? 😎

Your party has been my enemy since before I was born. It will, therefore, be deeply satisfying to watch its self-inflicted dissolution.

(Thanks to Thomas Wictor and Brian Cates)


Every Tuesday and Saturday, I blog at the award-winning DaTechGuyBlog. Latest post: Um, Germany? and Superhighway Robbery in Mexico.

When you hit the Tip Jar, it helps pays for: A Roof Over My Head, Food, Gasoline, Car Insurance, the writing of My Next Book(s), and Utilities--especially Internet and COFFEE! Yes, coffee is a utility.
Posted by baldilocks at 6:28:00 PM 3 comments:

About my kitchen sink ... Thank you, my friends. 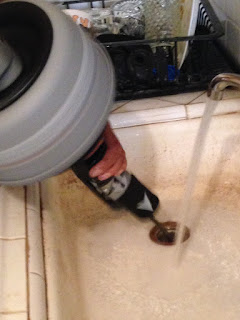 Every Tuesday and Saturday, I blog at the award-winning DaTechGuyBlog. Latest post: Um, Germany? and Superhighway Robbery in Mexico.

When you hit the Tip Jar, it helps pays for: A Roof Over My Head, Food, Gasoline, Car Insurance, the writing of My Next Book(s), and Utilities--especially Internet and COFFEE! Yes, coffee is a utility.
Posted by baldilocks at 5:13:00 PM No comments:

In spite of a short stint as a USAF Aircraft Armament Systems Specialist, I've never been a grease monkey kind of girl.

But they tell me that change is good.

I can barely sleep with this going on. And I definitely can't concentrate on writing. On top of this, the drain is slow. I own a snake and have already tried to alleviate the clog it once. Of course it was gross and I wasn't aggressive enough in loosening up the clog, so I'm going to try it again, but, obviously, I need to fix this first.

Some might wonder why I'm not calling my landlord about this. From experience with these owners, I know that I'll be waiting for weeks until they get around to it. Example: the security door on the building's entry is encoded to each resident's phone number. When I got a new number last year, my landlord put my number in, but it's the wrong number. When someone enters my apartment number, he/she gets the voicemail of some law office instead of my cell.

I told them about this months ago and, again, two weeks ago when they came to collect the rent.

I can't fix that, but I can fix these drain things. So, this is my portion for today.


I view this as evidence that it's time for me to learn new skills. Pray for my success and ...

UPDATE: Thanks for the link, Glenn! Will post updates directly.

UPDATE: Bought: O-rings,  cartridges, WD-40 and super Drano. Changed my mind and snaked the drain first. Looks like the clog is too far out.

So now I'm trying to remove this. Tried with synthetic gun oil and WD-40. Glad I clipped my nails first! /chick 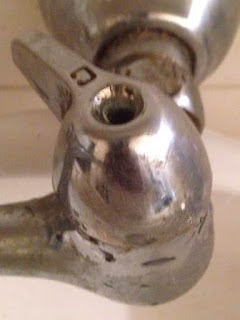 UPDATE: Taking a break to write a post for Da Tech Guy Blog.

UPDATE: I just don't have the hand strength. Looking at cheap plumbers in LA. With you fine people hitting my tip jar, I think can happen!

UPDATE: Upside to taping on the faucets with a huge hex wrench: water not flowing so freely.

UPDATE: Thank-you emails are in the future of many. When the plumber gets here in the next few days, I will put up a new post.


Every Tuesday and Saturday, I blog at the award-winning DaTechGuyBlog. Latest post: The Left's Latest Attack Against Women and The True Leaders of the Democrat Party.

When you hit the Tip Jar, it helps pays for: A Roof Over My Head, Food, Gasoline, Car Insurance, the writing of My Next Book(s), and Utilities--especially Internet and COFFEE! Yes, coffee is a utility.
Posted by baldilocks at 10:15:00 AM 7 comments:

The Road Away From Perdition 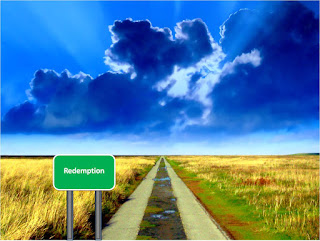 In February, I noted certain words which President Trump uttered during the State of the Union address.

To defend the dignity of every person, I am asking the Congress to pass legislation to prohibit the late-term abortion of children who can feel pain in the mother’s womb.
Let us work together to build a culture that cherishes innocent life. And let us reaffirm a fundamental truth: all children — born and unborn — are made in the holy image of God.

Like President Reagan before him -- "Mr. Gorbachev, tear down this wall" -- this president seems to have emboldened the forces of life and liberty through "mere" declaration. President Trump spoke defeat on the murder of children.

In the wake of the SOTU speech, several states have enacted "Heartbeat" legislation, which bans abortion if the unborn baby's heartbeat can be detected -- around six weeks after the end of a woman's last menstrual cycle. And, today, Alabama has banned abortion outright.

As many have pointed out, the new anti-abortion laws will be challenged in the courts, which, of course, is the point. It will lead to a review of Roe v. Wade.

In response to this chain of events, pro-abortionists are apoplectic, so much so that this happened a few days ago. 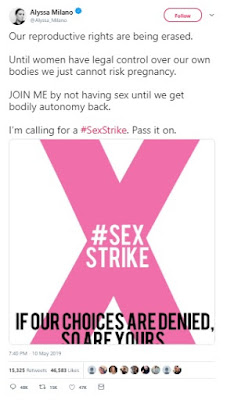 The beauty of this: Ms. Milano is unintentionally advocating a principle which pro-lifers -- especially Christians -- have been promoting since forever as the alternative to promiscuity which is the primary behavior leading to abortion: abstinence. And all the self-proclaimed righteous protectors of women's bodies are falling in line right behind her.

Abstinence and fewer abortions. That this may also result in fewer leftists is just a side benefit.

It's almost as if God has made the pro-abortionists so confused that they will do what He wants anyway while believing they are striking a blow for "women's rights."

God has a history of befuddling His servants' enemies. And in this case, God's servants = unborn babies.

Are these things stepping stones on the road towards our national repentance for the shedding of innocent blood?

I think they are.

Keep watch and, most of all, fret not.


Every Tuesday and Saturday, I blog at the award-winning DaTechGuyBlog. Latest post: The Left's Latest Attack Against Women.

When you hit the Tip Jar, it helps pays for: A Roof Over My Head, Food, Gasoline, Car Insurance, the writing of My Next Book(s), and Utilities--especially Internet and COFFEE! Yes, coffee is a utility.
Posted by baldilocks at 3:05:00 PM 2 comments: