Aftereffects of the Obama Presidency


We spent eight years being afraid of what Obama had in store for us next. I want to see what’s in store for him.

How Bad is LA? 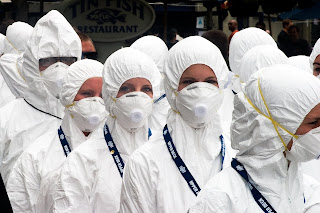 I can say this for certain: the entirety of LA has not become some horrid fantasy combo of trash and cooties.

The Irrelevance of Presidential Likability


Fact is, most people will accept tyranny if the tyrant blows smoke up their asses.

Open Service to the Principalities and Powers


You want the enemy’s servants to be open about their identity. This indicates arrogance — a fatal flaw.

Trump Takes Away and Gives


I, too, am angry, Nancy, but not at President Trump and not even at you and your party. After all, we expect you to favor foreigners over Americans and to screech RACISM!!! when you don’t get your way. Nature of the beast.

I’m angry at my party.


I am again reminded of how much goodness there is out there in the highways and byways of our great country.


Jesus the Christ said that, immediately prior to the Last Days, nation would rise against nation. He was referring to tribal/racial conflict, but He also warned His followers to not be deceived by it.

A Slice of the CA Voter Fraud Pie

This blog is supported by donations. Yours are greatly appreciated!

Came across this the other day.


It seems like every new song that gains notoriety in the Hip-Hop world is a melodic manifestation of absolute destruction.

I’m aware there are many artists in the Hip-Hop/Rap genre that DO speak life, love and revolution. My point is they are severely outnumbered by the artists spreading death and self destruction.

Typically, the prerequisite for a ‘poppin’ song nowadays is:

Who decided this was the best kind of music black people should be making and promoting? I’ll tell you who, the system of white supremacy [sic; see footnote below]. (...)

Making positive, powerful, enlightening, revolutionary music for the black community (particularly) in America is not a profitable venture.

Well, it used to be.

At the risk of displaying my own get-off-my-lawn-ism, not only do I recall when popular black music – R&B – featured talented vocalists, musicians, composers, and lyricists, I remember when such huge stars used to acknowledge God in their work as a matter of course.

People Get Ready is a 1965 offering from the Impressions. Curtis Mayfield is the lead singer.

The song is covered regularly at my church.

And take Earth, Wind, and Fire, arguably the most popular R&B band ever. Maurice White had the audacity to name his band after God, not to mention several albums: I Am, All&All, Spirit. Looking back in review, nearly every other song on their 70s and 80s albums was a hymn.

From the Grammy juggernaut that was 70s-era Stevie Wonder, Have a Talk With God (1976).

Many of us feel we walk alone without a friend
Never communicating with the One who lives within
Forgetting all about the One who never ever lets you down
And you can talk to him anytime He's always around
When you feel your life's too hard
Just go have a talk with God.

Even when a song wasn’t overtly about God, sometimes an old-school R&B vocalist – who often got his/her start singing in church -- couldn’t help but acknowledge Him.

Consider Bad Luck (1975) by Harold Melvin and the Bluenotes.

At the end of the song, their lead singer, the legendary Teddy Pendergrass, ad-libs.

The only thing I got that I can hold on
Is my God!
My God!
Jesus be with me!
Jesus!

And then there was Al Jarreau. Closer is from Album of the Year Grammy-nominee Breaking Away (1981). Giving the lyrics a closer listen, it's plain that he is not talking about his significant other.

Won't you look down upon me, Jesus
You've got to help me make a stand
You've just got to see me through another day
My body's aching and my time is at hand
I won't make it any other way

Even some rappers recognize the power inherent in the name of Jesus. Here's Jesus Walks (2009) by Kanye West. And Kanye makes the same point as the writer.

Now hear ye hear ye want to see Thee more clearly
I know He hear me when my feet get weary
Cause we're the almost nearly extinct
We rappers are role models we rap we don't think
I ain't here to argue about his facial features
Or here to convert atheists into believers
I'm just trying to say the way school need teachers
The way Kathie Lee needed Regis that's the way I need Jesus
So here go my single dog radio needs this
They said you can rap about anything except for Jesus
That means guns, sex, lies, video tape
But if I talk about God my record won't get played

Certainly there are present-day artists who devote their works to God. But there aren't so many Superstars who do this.

What you put into your being -- your mind via your eyes and ears -- has output. The purveyors of the type of "music" described at the top know this.

And I'm not the only one who believes that the devolution of black American music is intentional. But the culprit isn't white supremacism. It's a higher principality and power.

People who've had dreams and visions of Heaven say that it is full of beautiful music. Well, it seems to me that modern Hip Hop is the opposite of that -- grating noise whose purveyors rejoice in theft, murder and destruction.

However, the producers of these offerings would go broke if no one were buying it. So what does that say about what we've become?

By the way, about your presence on my lawn ...

*To use the term white “supremacy” implies that whites really are supreme to all others. The term white (or other) supremacism is the correct one.And author of this op-ed is correct except for that line.

(Thanks to Cedric White)


Every Tuesday and Saturday, I blog at the award-winning DaTechGuyBlog. Latest posts: Limitless and Let It Go.

I have three fathers: Father, Uncle John, and Dad.

It has always seemed unfair, since I know several people whose only father is the guy who contributed the sperm and, all too often, nothing else, not even his last name.

Each one of my fathers, however, has contributed something good to the person I am.

From Father, I received an unusual heritage and a DNA-level love of language and communication. Uncle John took that raw material and laid a foundation; he taught me to read, write, and compute well before my first day in Kindergarten. And Dad has instilled in me the love of the Lord along with a healthy dose of common sense.

Why did I get such abundance?

Last year, I figured it out.

We Christians are adopted children and God the Father modeled that in my life by giving me two adoptive fathers. It was something that He wanted me to see and to tell. And, since I’m a little slow – I spent too much time with my eyes on something other than God – it took me 57 years to figure it out. By the way, God began showing me representations of Himself when I was a small child.
.
God’s purpose in the modeling? To show me that's He real and that He loves His previously fatherless children, but I suspect that there's more for me to see and that pointing this out in public will lead to it. I'll let you know.

Anyway, I’m grateful to God for gifts that He gave me in these three men. Uncle John went to his final destination in 2000, but Father (80) and Dad (77) are still with us and looking pretty good, too!


Happy Father’s Day, good men. I love you.
Every Tuesday and Saturday, I blog at the award-winning DaTechGuyBlog. Latest posts: The Irrelevance of Presidential Likability and Open Service to the Principalities and Powers

Follow me on Facebook, Twitter, MeWe, and Social Quodverum
When you hit the Tip Jar, it helps pays for: A Roof Over My Head, Food, Gasoline, Car Insurance, the writing of My Next Book(s), and Utilities--especially Internet and COFFEE! Yes, coffee is a utility.
Posted by baldilocks at 4:40:00 PM 1 comment:

My May 2019 Post Digest for Da Tech Guy Blog


It’s a war of attrition and the enemy seems all-powerful. But don’t be scared or silent. Giants can be defeated, as history shows.


Simply, abortion is demonic. It is the shedding of innocent blood and it’s how these lost souls appease their father.

It is a perversion of the sacrifice of Jesus the Christ — who voluntarily shed His innocent blood to atone for the sins of all so that no more atonement is necessary.

The Left's Latest Attack Against Women


Why does the Organized Left want to destroy organized women’s sports?

The True Leaders of the Democrat Party

You Will Be Made Accountable For Your Voting Choices


Weakness and despair are what  a combatant wants its adversary to have and to feel. And these combatants will keep trying to roll those grenades into your tent.


If [the Germans] really wanted to stop antisemitism in their country, it would be over with yesterday.

This is intentional. And that’s why it will get worse there.


I’m old enough to remember when people who stuck their money in between their mattresses were called crazy and paranoid.

Every Tuesday and Saturday, I blog at the award-winning DaTechGuyBlog. Latest post: Aftereffects of the Obama Presidency.

When you hit the Tip Jar, it helps pays for: A Roof Over My Head, Food, Gasoline, Car Insurance, the writing of My Next Book(s), and Utilities--especially Internet and COFFEE! Yes, coffee is a utility.
Posted by baldilocks at 4:25:00 PM No comments: