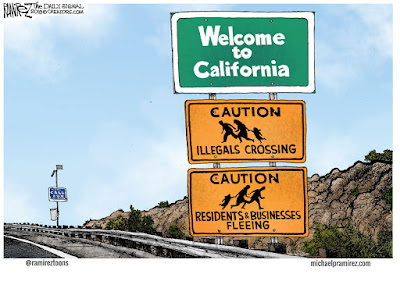 Having been brought to California as a babe-in-arms from my birthplace (Chicago), I’ve spent most of my life here – with a break between 1978 and 1994.

Many outside observers look at the present state of California, opine that we voted for it, and, therefore, deserve what we are getting. They are wrong for many reasons and one in particular: the assumption that voting process here is sweetly pristine and untainted by any sort of voter fraud – something to which their own states are not immune.

California’s leftist government did not simply present itself to the voters and ask us to choose them instead of choosing non-leftist candidates. The game had to be rigged and the ground had to be softened.

In this part is a list of tactics used which, over time, created the Leftist juggernaut which is the California we see in 2019. The second part will contain continued tactics intended to drive out the stragglers in the middle class. A new one pops up nearly every day and I'm pondering escape.


In November 1994, California voters approved Proposition 187 by a 59%-41% margin. This initiative broadly denied illegal aliens state-funded services, including public education and non-emergency health care. It also required state authorities to facilitate the identification and removal of illegal aliens by the U.S. Immigration and Naturalization Service (INS). The State of California’s Legislative Analyst had estimated that Prop 187 would reduce net state outlays about $100-200 million per year.

A federal district court temporarily halted Prop 187's restrictions on benefits in December 1994, and this freeze was continued under a November 1995 preliminary injunction.

None of Proposition 187 was ever enforced and the law was ultimately repealed in 2014.

More than 1 million immigrants in the country illegally have obtained special California driver’s licenses since the state first began issuing them a little more than three years ago, the state Department of Motor Vehicles announced Wednesday as officials hailed the number as a major milestone.

Assembly Bill 60, which took effect in January 2015, requires the DMV to issue driver’s licenses if applicants can prove their identity and California residency, as well as meet all testing requirements, regardless of whether they can show they are in the country lawfully. As of March 30, about 1,001,000 immigrants have obtained the licenses, which are renewable after five years.


Since 1993, the National Voter Registration Act, often known as the Motor Voter law, has helped millions of people register to vote or update their voter information during a driver license or ID card transaction at the California Department of Motor Vehicles (DMV).

The California Motor Voter program applies to Californians who are 18 or older and meet the following criteria:

• A United States citizen and a resident of California.

• Not currently found mentally incompetent to vote by a court. (Click here for more information)

Emphasis mine. Related to the next topic.


Randall Marquis has lived in California for 31 years, but he knew it was a mistake when he received a notice last month that said he was newly registered to vote. He may have a state driver’s license, but he’s a citizen of Canada.

“When I saw that card, I just threw it out,” Marquis said. “I know I’m not going to vote. I’m not allowed to vote, it’s stupid that I should be registered to vote.”

The Newport Beach resident, who has a green card and is married to a U.S. citizen, was one of some 1,500 people who the California Department of Motor Vehicles said on Monday were wrongly registered to vote between late April and late September. These errors, which included other non-citizens, are in addition to the roughly 23,000 registration mistakes disclosed by the DMV last month.

I’m sure that this is just an isolated incident and only related to these few people. /sarcasm


California was a red state, but as the Hispanic population increased, it became a blue state, and it has remained so since. There is no sign of going back; the mainstream press gloats that California is "a one-party state."

The state Republicans died out not because of inevitable demographic changes; the outcome could have been different. Nor did they die out because they were not "sensitive" enough to Hispanics, as former national GOP Chairman Marc Racicot said with reference to Prop 187.

California was faced with a choice: stop the influx of welfare-state constituents, or be washed away by the growing welfare state. The problems stemming from illegal immigration were so great that even the liberal Urban Institute acknowledged, in a 1994 report, that one in five inmates in California state prisons were deportable aliens [1]. Bill Clinton, in a 1994 speech in California, told his audience, "[I]t is not wrong for you to want to reduce illegal immigration."

Prop 187 was an attempt to address a set of challenges tied to illegal immigration. By 2002, the state was "struggling to balance a budget saddled with costs for illegal immigrants' education and health care," as the Wall Street Journal reported. Wilson and the 59% of voters who supported Prop 187 were vindicated on the merits. However, given the gradually changing population, the statists sidestepped the merits and won through superior numbers.

Now, a decade later, there is no struggle to balance the state's budget. There is only a Democratic supermajority, more spending, more debt, and what the Associated Press calls a Hispanic population that increasingly lives in "racial isolation." All the while, this population is "[a]ssimilating into the welfare system," according to Harvard economist George Borjas.

When the population won't give you what you want, get a new population.

And, below, the big one.


As a native Californian who has left the state, I witnessed California’s terrible turn firsthand.

In 2010, the state passed a new law requiring candidates to participate in a single consolidated open primary, often called the “jungle primary.” In these primaries, the top two vote-getters end up on the election ballot, where they square off against each other. This system has driven many Republicans off the election ballot, as the top two slots are often won by Democrats.

Some Republicans originally backed the jungle primary law, including then-Gov. Arnold Schwarzenegger. They hoped it would help moderate candidates in elections and thus make the state more bipartisan.

But what has happened is the exact opposite. This law made California ripe for one-party rule.

As The Daily Signal’s Fred Lucas wrote in The American Conservative, it led to bizarre absurdities, such as Democrat Sen. Dianne Feinstein being labeled the “Republican” option in a Senate race due to the fact that her only opponent was a more militant progressive than her.

And there you have it, even though this isn't an exhaustive list and the next one won't be either, though it will be exhausting ... if I ever finish it.


Every Tuesday and Saturday, I blog at the award-winning DaTechGuyBlog. Latest post: The Pentagon’s Vast All-Wing Conspiracy: Plunder