Why We Black Conservatives Don't Try to Convert Our Families

Agree or disagree, if you like the writing quality, scroll down and donate! Thanks. 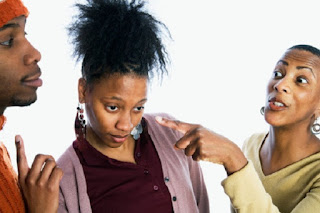 An appearance by Omarosa Manigault, an invited speaker at a conference conducted by National Association of Black Journalists, predictably devolved.


A panel discussion featuring White House aide Omarosa Manigault and relatives of two young black men killed by police degenerated into a tense, chaotic mess when audience members jeered and shouted at Manigault for her answers to questions.

It reminded me of observations I made three years ago. Here is a partial repost, slightly edited:

After waking this morning [Ed: three years ago], I got up, washed my face, brushed my teeth, threw on some clothes, and, without breakfast or coffee, went to get my hair cut (shaved). Black barbershops have a justifiable reputation for being places where real talk occurs and, sometimes, where shouting and anger occur. Being un-caffeinated, I was in no mood to get into any conversation; much less, a political one with a bunch of liberals, but my barber alerted the room that I was a Republican. So, the game was afoot.

Many wonder why black conservatives refuse to talk to black liberals about conservatism. It’s simply this: they won’t STFU long enough to let you complete an idea. In addition, having to, once again, listen to able-bodied, able-minded, working, responsible, black adults go on about what the “white man” owes “us,” made me want to scream, though I restrained myself.

Being out-numbered 3-1, being talked over multiple times, being insulted more than once, not being allowed to answer proffered questions, and having my actual answers ignored, at some point–out of frustration–I let the “conversation” go. However, I was able to put forth a couple of ideas which I had not completely articulated in the past. One follows in a longer form than I was able to get out earlier today.

Black people—not just those who are American—view white people in the same manner that anti-theists view God. Anti-theists are different from atheists. Even though anti-theists deny God’s existence with their mouths and keyboards, they believe in Him…and they hate Him.

Many black people have a similar view of white people: they view all of you as their hated masters–yes, still, in 2014—but their masters, nonetheless. Moreover, as our masters, it is your duty to feed, clothe, and house us; and to give us anything else we ask of you.

As history shows, before the Civil Rights Era, most black Americans were Republicans; now, because of well-crafted strategy implemented by LBJ, et al., most are Democrats. That strategy is based on the real slavery mindset: that whoever provides the most things—whoever is the most generous patron to black people–is a friend to black people. LBJ knew this; therefore, he strove to transform his party’s image into that of the good and generous patron.

Patron: 5 : a master in ancient times who freed his slave but retained some rights over him

Even though the Emancipation Proclamation of 1863 and the Civil Rights Act of 1964 respectively disallowed patronage and de jure serfdom, the mindset remains embedded in the progeny of the “former” slaves/serfs. Thus, since the CRA, most black Americans have given their allegiance to the Democrat Party and, because of the mindset, they have certain expectations of white Americans—those expected of a patron.

From that notion comes this one: many black liberals believe that black conservatives give their allegiance to the Republican Party for the exact same reason, and that they are, therefore, sell-outs.

Note that, to black liberals, even politics always involves some imagined sale of black persons.They are unable to view white persons outside of the master/patron/domination paradigm and cannot envision any relationship between black persons and white persons outside of that perspective. Somebody has to be on top. And, in light of our past[i] and our indoctrinated and unacknowledged feelings of inferiority, most black liberals believe it will be you, my white friends.

Most black conservatives have freed themselves from this mindset, but, like all long-term indoctrination, it remains insidious.

Therefore, I conclude this: until the majority of black people get white people out of their heads and begin view you as equals, the shouts of racism will continue, as will the shout-down of the truly emancipated. Freedom begins inside.

[i] The history of enslavement of black Africans begins well before the European and American involvement therein.


Every Tuesday and Saturday, I blog at the award-winning Da Tech Guy Blog. Latest post: Refusing to Flash the Gang Sign.