That Such Men Lived 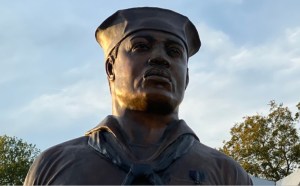 Originally posted on December 7, 2019 at DaTechGuy Blog. Peter's old domain name has been corrupted and his new link is here. You can help Peter with his blog travails by donating to his account.

Doris “Dorie” Miller has always been my favorite Pearl Harbor hero. Is it because he was black? Partially.

Simply, it’s impossible to separate his race from his heroism, considering that the US. Military was segregated back then, that black servicemen and women were mostly assigned to segregated units, and that most were tasked with servant and “menial” jobs. Miller, himself, was a cook — Messman Third Class and Ship’s Cook Third class — aboard the USS West Virginia. Way back when I was in kindergarten, he was the first war hero to enter into my consciousness.

Miller was the recipient of the Navy Cross – at that time, the third highest award behind the Medal of Honor and the Navy Distinguished Service Medal  — for the following:

When the Japanese attacked Pearl Harbor on December 7, 1941, Miller was doing laundry below decks on the USS West Virginia. When the alarm called the ship’s crew to battle stations, Miller headed a gun  magazine amidships [sic]. A torpedo had damaged the magazine, so the physically strong Miller began carrying the wounded to safety. Among those he attended to was the ship’s commander, Capt. Mervyn Bennion, who was mortally wounded. Miller then manned a .50-calibre antiaircraft gun, for which he had no training, and continued firing on the enemy until he ran out of ammunition and received the order to abandon ship.

Admiral Chester Nimitz himself pinned the Navy Cross to the young man’s chest. Miller died in 1943 when his subsequent ship, the USS Liscome Bay, was sunk by the Japanese. He was 24.

What I love about Doris Miller’s existence is that the man was here for only a short time and was merely playing the cards that life dealt him when he performed the action that will long outlive him. When the challenge came, he stepped to it and met it — something intrinsic in heroes and heroism.

And this may seem like a change of topic, but it isn’t. Back when Senator Robert Byrd (D-WV; ironically) passed away in 2010, I remembered writing — prior to his passing — about his actions during WWII:

Byrd refused to serve in World War Two due to blacks being a part of the force, even in their lowly status before the desegregation of the US Armed Forces in 1948.  I cited that here using Wiki, but the reference has been cleaned up.

If, by some chance Byrd got to go to Heaven, I hope he gets to be Dorie Miller’s butler.

Whoever Miller’s Heavenly Cook and Messman is, I’m sure he’s just happy to be there serving a great man and is doing so with a smile.