What Lies Between Normal and Nutting Up (UPDATES)

UPDATE: This is an actual photo of Tashfeen Malik.

UPDATE: Twitter people are telling me that the photo below is not one of the terrorists, but of two family members. As for the shame-attempts at posting the photo: bugger off.

We’re now getting a partial view of who Syed Rizwan Farook, 28, and his wife Tashfeen Malik, 27 were. Farook was, like me, Chicago-born, while Malik was a naturalized American citizen, born in Pakistan.

The two seemed to present a portrait of the Melting Pot and its boundless, boundary-less opportunity for any person regardless of race, color, gender or religion. Just like countless other American couples, he was a young professional--an environmental specialist employed by the San Bernardino County Department of Public Health, and she appeared to be a stay-at-home mother, possibly educated as a pharmacist. They left their six-month-old daughter with Farook’s mother before setting out on their mission.

Somewhere in between their outward normalcy and their apparently well-planned mass murder of Christmas party guests at the Inland Regional Center in San Bernardino lie the true personalities and ideology of Farook and Malik.

Here are a few things we know about them.

• Federal officials believe that Farook and Malik met two years ago when the former traveled to Saudi Arabia to make Hajj.
• A separate report reveals that Farook traveled to the country again this year and that the nuptials happened upon his return.
• Malik came to America via a K-1 visa. She received had her citizenship expedited when she married Farook.
• According to Farook’s estranged father, he was "very religious. He would go to work, come back, go to pray, come back. He's Muslim."
• A man who worked close to the couple’s home witnessed “a half dozen Middle Eastern men” in the area, but said nothing about it to authorities, being loath to profile them.
• Among other firearms, they used AR-15 rifles, which are illegal to own in California.

What appears to have been inserted into Farook’s life is a closer adherence to his faith. We see the outcome.

There are millions of Muslims in America—both born and converted—who are law-abiding and peace-loving. Perhaps they remain this way in spite of their religion—or, perhaps, because their numbers do not bode well for a victory against the most egregious representative of the well-armed Dar el Harb.

Which bids this question: has President Obama been trying to even the odds?

We will soon find out. Arguably, we have already.

UPDATE: The woman in this photo is not Tashfeen Malik. See abave. 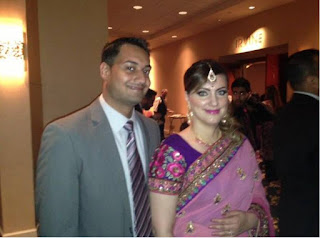 
Please contribute to Juliette’s Projects: Kenya Trip, A Roof Over My Head, my Storage Facility, my new novel, this blog, and my Internet--to keep them going and to the COFFEE fund to keep me going!
Posted by baldilocks at 2:06:00 PM

I don't think you automatically gain citizenship by marrying a citizen. You can more easily be approved for a visa, and that visA is easily extended. I have a friend who married a Russian woman. She still had to apply for a visa, keep that visa current, and separately apply for citizenship, all of which was very expensive, because they chose to apply legally.

I need tore-word that; I didn't mean to convey the idea of instant American.

I inferred the last part of what you said for one of the links. Have to look up K-1 visa, but it sounds like that's specifically what it's for, as opposed to other types of visas, like the one my father had 55 years ago. He was married to my mom, an American, but never was naturalized.