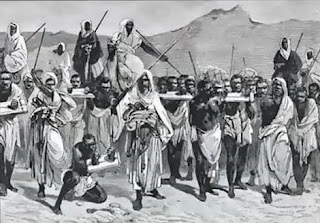 The following is from 2010. I was reminded of it when a guest in this post pointed out that Americans were not the first to export black Africans as slaves. I share it every now and then, usually when someone assumes that I know nothing about the 1400-year-long sacking of my father's home continent. But, with past slaving and slave-holding being all the rage of late, this information has become pertinent once again.

As for the shame-monger who referred to me as a House Negro because I gave the public side-eye to  the Ground Zero Mosque -- which never got built -- it turns out that he is Philadelphia Family Court Judge Wayne Bennett. Bennett runs a blog called Field Negro.

A lawyer calls a veteran with a two-year degree a House Negro. Don't you just love the irony?

In 2008, I posted a YouTube video that had been part of a series exposing the truth about the Islamic Civilization with special emphasis on the horrors of the Trans-Saharan Slave Trade.  My intent was to counter the exhortations of Barack Obama's former pastor, Jeremiah Wright, and the like-minded who continue to excoriate America and the rest of Western Civilization for past sins against black African Slaves and Americans of African descent.

The owners of YouTube, however, have blocked the account of John Alembillah Azumah -- the man interviewed in the series and the author of the book, The Legacy of Arab-Islam in Africa: A Quest for Inter-religious Dialogue. One can guess that some people were offended by the series -- a state of affairs which often occurs when the truth is told. [UPDATE 2022: video story available here.]

This particular copy of the video, entitled "Muslim Black Slavery - Islam Slave History of Black Africa," is now posted at MetaCafe by a third party.


The success of Mohammedan Islam in deceiving, misinforming, deforming and contorting both history and reality over a period of almost fourteen hundred years has been astounding--that is, until now.

The greatest tragedy about this particular subject is that most of the descendants of African slavery--the black people in the Americas, around the world, as well as among the African blacks--are totally ignorant of the actual facts.

Before we lose the concentration of our visitors, I would like to make the following statement and then prove it: that the worst, most inhumane and most diabolical of the black African Slave Trade was initiated, refined, perpetrated and implemented by the Mohammedan Arabs and, later, aided and abetted by the black converts to Mohammedan Islam.

I predict that, as usual, the two subcultures--those of denial of facts and of Political Correctness--will attack us without once disproving a single statement and/or conclusion that we make.

And here are some pertinent excerpts:

It should also be noted that black slaves were castrated based on the assumption that the blacks had an ungovernable sexual appetite.

A comparison of the Islamic Slave Trade to the American Slave Trade reveals some extremely interesting contrasts.

While two out of every three slaves shipped across the Atlantic were men, the proportions were reversed in the Islamic Slave Trade: two women for every man were enslaved by the Muslims.

While the mortality rate of slaves being transported across the Atlantic was as high as ten percent, the percentage of slaves dying in transit in the Trans-Sahara[n] and East African Slave market was a staggering eighty to ninety percent.

While many children were born to slaves in the Americas--the millions of their descendants are citizens in Brazil and the United States of today--very few descendants of the slaves that ended up in the Middle East survived.
While most slaves who went to the Americas could marry and have families, most of the male slaves destined for the Middle East were castrated and most of the children born to the women were killed at birth.

Azumah pronounces the denial of the facts concerning the on-going Islamic Slave Trade as 'obscene.'

To those whose male ancestors survived American Slavery long enough to ensure that the former would be alive in the twenty-first century and, therefore, be able to refer to me as a House Negro for suspecting the motives of the putative builders of the "Ground Zero" Mosque, I feel pity.

That pity is mixed with a sense of astonishment, however, at this conclusion: that so many black people are so well indoctrinated with perpetual anger at the sins of America's past, that they would ignore the more egregious sins of Islam's present and desired future.  Hurling epithets and pretending that the opponents of the "Ground Zero" Mosque want to stifle freedom of religion is a lot easier than gathering the pertinent facts, connecting them, analyzing them and coming to a cogent conclusion, it seems.

On the other hand, perhaps such people have indeed concluded that Islam would like to expand its near destruction of those of African descent--with black men being the special and specified targets for annihilation.  Perhaps the slinging of epithets, etc. is merely a smokescreen--an insurance for the future.  Such people will be able to say to their future masters, "see? I stood up for the Ummah against that infidel, Ochieng."

Maybe such people are merely trying to protect their own testicles--such as they are.

Enslave a man's mind and the rest of him--including his testicles -- will follow; no more need for physical chains.

UPDATE 2017: John Alembillah Azumah's bonafides: he was the Director of the Centre for Islamic Studies at the London School of Theology. He is a convert from Islam to Christianity. From his Wikipedia profile:

It appears that Azumah may have returned to his native Ghana, but I imagine that he stays on the move.

This is my JOB. It pays for: A Roof Over My Head, the writing of My Next Book(s), and Utilities--especially Internet and COFFEE! Yes, coffee is a utility.
Posted by baldilocks at 5:16:00 PM

Thanks for opening my eyes.

It also needs to be pointed out that slavery existed in all cultures through history, and to emphasize who were the first to abolish slavery.

Happy for the recommendation: The Legacy of Arab-Islam in Africa: A Quest for Inter-religious Dialogue." You might enjoy the translation of Song of Songs by Brian Simmons (The Passion Translation) and the reference to the Shulamite's beauty which God made certain to proclaim in this Word.

I've always been told I'm fairly smart and thought I was based solely on how others act in public, but you ma'am, leave me in the dust. Thank you for the thoughtful post and I pray that you have a long and fruitful writing career.