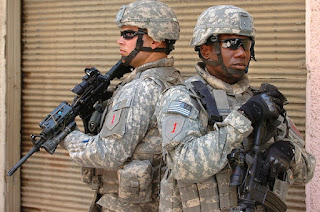 This past week there have been a couple of pieces worth pondering. One is a proposal to ban veterans from four-year universities.  Campus Reform:


"A four-year, traditional university is supposed to be a place of learning, of understanding, of safety, and security. However, there is an element among us who may be frustrating those goals: Veterans,” the article asserts, defending the claim with sweeping assumptions about those who have served in the military.

“Many veterans openly mock the ideas of diversity and safe spaces for vulnerable members of society,” the author contends, saying that “this is directly in contradiction to the mission of UCCS.”

The newsletter also states that many veterans say they “do not see color,” but dismisses the claim as untrue because of their “socialization into the military culture that is that of a white supremacist organization.”The article then complains that veterans typically have an “overwhelming” presence in the classroom, which “distracts” other students, particularly "vulnerable individual [sic] such as LGBTQQI2SAA, who have been known to be the butt of insensitive jokes made by veterans.”

Claiming that veterans “usually are associated with extremist right-wing groups such as the [T]ea [P]arty and the NRA," the author contends that “in order to be a safe space for all students, extremist right-wing groups must be entirely, positing that they "should be allowed to attend trade schools, or maybe even community college." suppressed on campus. This would include their followers: veterans.”

Still, the article graciously allows that veterans should not be excluded from obtaining an education entirely, positing that they "should be allowed to attend trade schools, or maybe even community college."

That the proposal come from a (presumably) student-authored newsletter called the Social Justice Weekly would have made it innocuous, if I didn’t know the Left’s history of demonizing the military and if I had not been observing how these sparks become fires.

Just hours after reading that letter, I discovered this Huffington Post op-ed: Becoming A Racist: The Unfortunate Side Effect of Serving Your Country?


In an interview with CNN’s Anderson Cooper, Vice News’ Elle Reeve mentions that security for the neo-Nazis was not provided by the Charlottesville police, as one might expect, but by veterans of the Iraq/Afghan war.

To hear that these veterans claim they were ‘radicalized’ in Iraq and Afghanistan during their tours of duty is one of the more unfortunate things to come to light regarding the side-effects of serving your country.

By now, we’re all familiar with PTSD (Post Traumatic Stress Disorder) and even with proper treatment, the debilitating state it can leave a returning soldier in, sometimes for the rest of their lives.

But to learn that these brave men and women over there return with a new-found hatred for those different from them, especially after their mission is one of liberation from those who kill and persecute anyone of different faiths/beliefs, is quite disturbing to say the least.

I can’t even imagine the horror one sees serving their country in a sh*thole the likes of an Iraq or an Afghanistan. The brutality and terror these brave souls must face on a daily basis is incomprehensible.

But to think that even a small portion of them are returning from duty harboring feelings of such intense anger and disgust toward anyone who isn’t white, leads one to believe the military isn’t doing enough in the area of outreach, post-discharge. After all, not every soldier returns with a desire to protect and defend those with beliefs and convictions that stand in direct contrast to everything our military has fought against, and fights against as we speak. But, however small the percentage is, running security for white supremacists is quite a unique avenue regarding symptoms/display of PTSD, and these individuals obviously need help.
(…)
There is only one side to this fence, and to think we’re not only welcoming home members of the armed forces whose opinions and beliefs have been shattered and damaged due to their perilous environment, but who find solace in a President willing to condone those twisted beliefs, rather than make it his mission to do everything he can to help them, makes one worry about where the next Charlottesville will be, and who, exactly, we’ll be fighting.

What we have here seems to be two warring Leftist mindsets regarding those of us who have served in the US military, that we are either villains or victims.

I suspect that both pieces are different levels of reminder to the ground troops (ANTIFA, etc.) of the identity of the true enemy: the normal man/woman, that is, the usual type of person who volunteers to serve this country. Labelling all veterans as “white supremacists” and/or victims of “white supremacist” mind-control with professional combat training serves this end.  HP contributor David Fagin tries to cover himself when he refers to "a few" service members, but the title of his piece shows what he really thinks. And the last sentence shows what he really wants.

And I’ll give the authors of the Social Justice Weekly newsletter this: they are less dishonest than Fagin. The SJs are upfront about their contempt for veterans, but Fagin tries to cloak his in empathy. Stuff your empathy, Fagin. Coward.

BONUS: Fagin gets schooled in the comments of his op-ed.


Every Tuesday and Saturday, I blog at the award-winning Da Tech Guy Blog. Latest post: On the "Special Needs" of Black People.

This is my JOB. It pays for: A Roof Over My Head, the writing of My Next Book(s), and Utilities--especially Internet and COFFEE! Yes, coffee is a utility.
Posted by baldilocks at 4:40:00 PM