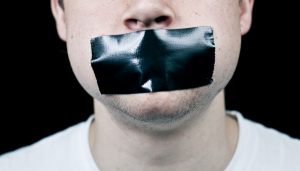 Over a year ago, I walked into Trader Joe’s without donning a mask and no one said a thing.

Since then, I’ve never put on a mask there, though almost all other customers do, as does the entire staff. Keep in mind that we’re talking about Los Angeles here.

Every member of the staff has said nothing about my maskless face and has been unfailingly polite and friendly, as was so before January 2020. One might call TJ’s the Chick Fil A of grocery stores. At least that’s been my experience.

Customers give me the occasional side-eye, but I’ve never been Karen-ed.

And then today there was Joel,*a young man with friendly brown eyes. As he rang up my groceries, he said:

“It’s so nice to see a smiling face after a day filled with masks.”

I was pleasantly shocked.

Me: “Not many know that Trader Joe’s doesn’t enforce mask wearing.”

Joel: “That’s going to change soon. Some people are going to get fined and arrested, Even though there’s no law on the books for it.”

I told him my name and that I'd look for him –- his eyes actually — when I come back to the store.

I bet there are many more working men and women in CA who make their money quietly and keep their mouths shut until the right time.

I think we should find a way to encourage them.

*Not his real name.

Well, no I'm not but hit the tip jar anyway!