Great Black Patriots in the House of Representatives 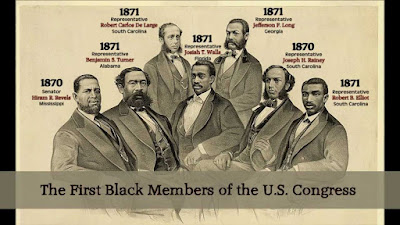 In honor of Black History Month, the following is a repost from seven years ago at my old blog. Spoiler alert: it's not about these HoRs.

Several links in the original post -- from NYU and from YouTube -- are dead. I will look for others, but in the meantime, here you go.

In the immediate aftermath of the American Civil War and during what is known as the Reconstruction period, sixteen black American men -- several of them former slaves -- served in the US House of Representatives with most being from states of the former Confederacy.  All were quite literate and some were self-educated.  What is certain is that these men saw hardship and racism that most of us 21st century brats of all colors cannot begin to conjure.

What is also certain is that each of these men were Republicans and for a very good reason: the Democrat Party of that time was the self-described Party of Slavery and remained the Party of Black Oppression long after.  (Arguably, this legacy continues.)

The site linked is called Neglected Voices and the voices of these men have indeed been neglected but the title is so…weak.  These men were anything but weak, hence the title of this post.  I’m sure, however, that they’ve been spinning in their graves of late at the words and deeds of those for whom they set precedent.

These men didn’t have to invent tales of racial epithets hurled or of racial violence; such were their constant companions throughout their lives.  Yet they did more than muddle through life, they soared.  These were real men, not victims; our current crop of representatives looks microscopic next to them

At any rate, here are excerpts of a speech from Richard H. Cain, in which he contradicts overt assertions by his white colleagues regarding the black race’s alleged inferiority:


Mr. Speaker, the gentleman states that during the struggle for freedom four millions of negroes lifted no hand to liberate themselves; that no stroke was made by them to deliver themselves from their thralldom; yet a few moments afterward he makes the statement that their kind-heartedness prevented them from rising up and destroying the wives and children of the rebel soldiers who were at the front. I accept the admission. Sir, there dwells in the black man's heart too much nobleness and too much charity to strike down helpless women and children when he has a chance to do so. No; though the liberty of
our race was dear to us, we would not purchase it at such a dastard price as the slaying of helpless women and children, while their husbands and fathers were away. I would scorn the men of my race forever if they had lifted their hands at such a period as that against helpless women and children, who were waiting in silent anxiety the return of their natural and lawful protectors. Our strong black arms might have destroyed every vestige of their homes; our torches might have kindled a fire that would have lighted up the whole South, so that every southern man fighting in the army would have hastened back to find his home in ashes. But our race had such nobleness of heart as to forbear in an hour [of] such extremity, and leave those men their wives and children.

Sir, I mean no disrespect to the gentleman, but I think the facts will bear me out in the statement that on every occasion on the battlefield where the black man met the white man of the South there was no flinching, no turning back, on the part of the black man. He bravely accepted his part in the struggle for liberty or death.

The gentleman says he still looks upon the whites as the superior race. That may be the case in some respects; but, sir, if they educated us they certainly should not find fault with us if we follow out what they have taught, and show ourselves obedient servants.

But, Mr. Speaker, there is another point. The gentleman states that we would make no movement to achieve our liberty. Why, sir, the education which those gentlemen gave the southern slaves was of a peculiar kind. What schoolhouse in all the South was open to the colored race? Point to one. Name the academy where you educated black men and black women as lawyers or doctors, or in any other department of science or art. Point out the county. Give us the name of the district. Tell the name of the school commissioner. Name the teacher. I will name one. Her name was Missa Douglas. And for the attempt to educate those of our race she was incarcerated in prison, and remained there for five years. That is the only instance, so far as I remember, of the education of the colored people of the South.

Examine the laws of the south, and you will find that it was a penal offense for any one to educate the colored people there. Yet these gentlemen come here and upbraid us with our ignorance and our stupidity. Yet you robbed us for two hundred years. During all that time we toiled for you. We have raised your cotton, your rice, your corn. We have attended your wives and your children. We have made wealth for your support and your education, while we were slaves, toiling without pay, without the means of education, and hardly of sustenance. And yet you upbraid us for being ignorant; call us a horde of barbarians!

Tell us of our ignorance--the ignorance of the colored race! Why, Mr. Speaker, it appears to me to be presumption on the part of the gentleman to state that we--we whom they have wronged, whom they have outraged, whom they have robbed, whose sweat and toil they have had the benefit of for two hundred years; whose labor, whose wives, whose children, have been at their beck and call--I say it ill-becomes them to taunt us now with our barbarism and our ignorance. Sir, if he will open to us the schoolhouse, give us some chance, we would not have to measure arms with him now. But even now, Mr. Speaker, although there is such disparity between us and him so far as relates to education and resources, even now we fear not a comparison in the condition of education in the last eight years between the whites and the blacks of North Carolina.

The gentleman, moreover, states that the reason why they did not educate the colored race was that the colored man was not ready. Not ready, Mr. Speaker; if I had that gentleman upon the floor, with my foot upon his neck, and holding a lash over him, with his hands tied, with him bound hand and foot, would he expect that I should boast over him and tell him "You are a coward, you are a traitor, because you do not resist me?" Would he expect me to tell him that when I had him down under my foot, with his hands tied and the lash in my hand lashing his back? Would he tell me that, in conscience, I would be doing justice to him? On, no, no! And yet such was the condition in which he had my race. Why, sir, the whipping-post, the thumb-screw, and the lash, were the great means of education in the South. These were the schoolhouses, these were the academies, these were the great instruments of education, of which the gentleman boasts, for the purpose of bringing these barbarians into civilization. [Applause.] When men boast, they ought to have something to boast of. When I boast, Mr. Speaker, I shall boast of some noble deed. I will boast not of the wrongs inflicted upon the weak; I will boast not of the outrages inflicted upon the indigent; I will not boast, Mr. Speaker, of lashing the weak and trampling under foot any class of people who ought to have my sympathy, nor will I reproach them for being ignorant, when they have been kept away from every means to educate them.


Every Tuesday and Saturday, I blog at the award-winning DaTechGuyBlog (Backup Site). Latest post: CIA, NSA to FBI: We May Be Younger, But We Have Outlived Our Usefulness Too