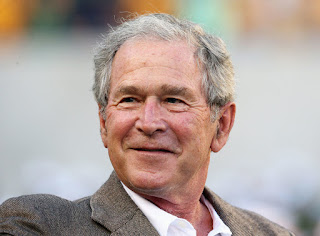 
Americans don’t want to pick cotton at 105 degrees, but there are people who want to put food on their family’s tables and are willing to do that. We should thank them.

This brought to my mind the old slave-owner justification for black slavery. I’m not alone.


Bush put a 21st-century spin on 19th-century plantation owners’ pleas that they needed imported chattel African labor because American workers were neither acclimatized to heat nor inexpensive enough to pick cotton in scorching Southern temperatures.

Additionally, gentleman-farmer Hanson points out that there is more than one area in which the former president demonstrated his cluelessness.


To wit, cotton picking (which I used to do as a child in the 1960s on my father’s small 40-acre cotton allotment) has been widely mechanized for over 50 years. And agriculture now only accounts for about 10-20 percent of illegal alien labor.

Mechanization has revolutionized farming, even in crops once deemed impossible to automate such as nuts, olives, raisins, and delicate Napa Valley wine grapes. New computerized and laser-calibrated breakthroughs will likely mean that even soft fruit and vegetables will soon be mechanically picked, matching ongoing labor reduction in weeding and irrigation.

Bush’s defense of illegal aliens – essentially a criticism of Donald Trump – wasn’t a surprise to me, though his location while doing it, in Dubai, was(!) After all, as president, he advocated the proposed Comprehensive Immigration Reform Act of 2007, which put many of his defenders in near revolt, including me.

Also, I remember when neither the former president nor most of his representatives would even try to rebut the Liberal/Leftist attacks on that administration and its policies. They left that up to the New Media: conservative bloggers. Stupid us.

After Barack H. Obama became president, GWB remained silent about his successor, even when the former repeatedly blamed him for bad things that happened from 2009 to 2017.

I understood GWB’s stance at the time, and it also made me think that he was being consistent; he had little to say about his own predecessor, one William J. Clinton, even in the wake of the horror in 2001 which, in my own opinion, was the crowning achievement that rested on the many Islamic terror attacks on the US that occurred during the Clinton Administration and went unanswered by it.

But now Trump's presidency seems to have loosened GWB’s tongue.

Bush's criticism of President Trump itself isn't the point; it’s where he did it, his own hypocrisy, and most importantly, what his criticism is.

I have blogged here about how hard it is to get a steady job here in the sanctuary state that is California even with skills and experience. (I’m pondering a possible 2019 escape.) What about the other Americans citizens here who don’t have skills and experience – especially the very young? I guess they don't matter.

George W. Bush thinks we should all thank the illegal aliens for picking the fruit and vegetables that I can barely afford, does he? I’m a huge berry fan. Strawberries run over $3 a pound.

But if I wanted to eat shit, literally and figuratively, pennies.

And, it’s a safe bet that the families of Katie Steinle, Jamiel Shaw II, Kayla Cuevas and Nisa Mickens would have two words other than 'Thank You" to say to illegal aliens and to George W. Bush.

On the other hand, one of those words is probably ‘you.’ Co-sign.

UPDATE: Thanks, Glenn. And thanks for the donations, folks!


Every Tuesday and Saturday, I blog at the award-winning DaTechGuyBlog (Backup Site). Latest post: CIA, NSA to FBI: We May Be Younger, But We Have Outlived Our Usefulness Too

Always thought highly of Bush even when he made boo-boo's.(who doesn't?) But when he started the remarks about Trump and his administration as if he was trying to get the approval of the democrats,I thought it was fairly tacky of him. After what the Dems said about him and his family and how many friendships and families were broken apart defending this guy during his administration NOW he's trying to make nice with them and make them like him.