President Trump has ordered that the US Armed Forces plan and execute a military parade and, as usual, the partisans are picking sides on the topic. I’m neither for nor against it, but I wanted to see what some of my fellow veterans who are anti-Trump had to say about it. Unfortunately, I haven’t found any of these who aren’t screaming MILITARY DICTATORSHIP!!!

Even a retired general is far too emotional in opposing it.  About the only logical reason to be against it is the amount of money it may cost.

Then, of course, there are those who don’t know jack about the military, military protocol, who are unfamiliar with the term ‘pass in review,' and who long to be martyrs in battle against the Evil Trumpian State. Like these. 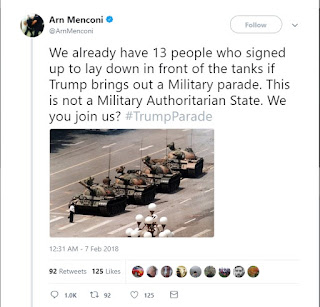 (Thanks to Heidi Gordon)


Every Tuesday and Saturday, I blog at the award-winning DaTechGuyBlog. Latest post: Who Runs Things? (Site still down.)