WaPo Turns Everything into a Racial Thing

Originally posted on April 23, 2019 at DaTechGuy Blog with a different headline.

Many Christians were angered and annoyed by the Washington Post’s editorial headline from two days ago [sic]. I’m among that number. 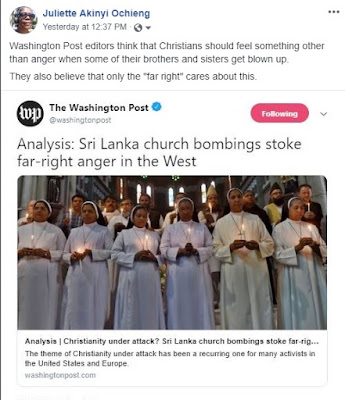 It’s interesting to note how often most of the American mainstream media has ignored the Islamist mass murders of dark-skinned Christians just in the past few years. Examples: Nigeria and Egypt.

Then there have been cases in which they could not ignore the brown skin of Christian terror victims, such as with the Sri Lankans or in the case of the mass shooting at a Charleston AME church back in 2015. This, of course, was valid in the case of Charleston, with the white perpetrator confessing that he hoped to ignite a race war. But, with the Sri Lankans, the victims were the same color as the terrorists.

Therefore, it was necessary to conjure a racial narrative for the massacre in Sri Lanka, as WaPo did. That is the implication in the term “far-right.”

The other day, a friend postulated that one of the earthly reasons that Christianity is so hated and demonized by the Organized Left is because, in centuries prior to this one, it was spread chiefly by white males – in their flawed, human (BIRM) way of course. I, however, contend that, in the earthly realm, Christianity has helped its converts far more than it has harmed them.

Of course, we know the spiritual reasons for this hatred.

Australian blogger – and old online friend — Arthur Chrenkoff sees the Organized Left’s strategic goal for what it is.

This effort to use language as a cudgel has several sinister implications. It delegitimises perfectly normal political ideas through guilt by association. It also creates the impression that the (genuine) far right is much bigger, more influential and more threatening and dangerous than it actually is. This in turn is used to downplay and minimise the dangers of Islamist and far-left extremism and terrorism. But perhaps the scariest aspect of it all is that the left, by manufacturing the far right monster, are actually genuinely contributing to the growth of far-right extremism. The relentless flood of identity politics, grievance and victimhood, and shaming and guilting entire sections of population based on their skin colour and culture is genuinely radicalising some misfits into fascism, like the Christchurch terrorist, for example. For every action there is eventually an equal and opposite reaction. The left might think it’s courageously defanging the fascist dragon but instead it’s just sowing its teeth.

That last sentence describes a desired goal of the Organized Left – a feature, rather than a bug.

By the way, when I talk about these things, getting angry is appropriate. But it’s important to let one’s anger dissipate and to appreciate those who are able to dissect this Othering of Christianity and of Western Civilization; to peel off its coating. When we point it out to you, we’re not trying to stoke fear, but to wipe away the confusion as to what the Sowers of Discord are doing.

Reconnaissance is your friend.

(Thanks to Dave Perkins and to Glenn Reynolds)