Slow Joe and the Volcano of Gaffe That is His Mouth 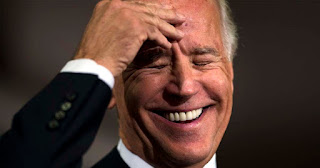 
Former Vice President Joe Biden told a popular black radio personality Thursday that he “ain’t black” if he was still weighing whether to support President Donald Trump in November’s general election — provoking outrage from the White House’s Republican allies and inducing queasiness among even some Democratic operatives.

The eyebrow-raising remarks from the presumptive Democratic presidential nominee came during an at-times contentious interview on “The Breakfast Club” that aired Friday morning, during which co-host Charlamagne tha God challenged Biden over his decadeslong record on racial issues and current contemplation of a black, female running mate.

“Listen, you’ve got to come see us when you come to New York, VP Biden,” Charlamagne said. “It’s a long way until November. We’ve got more questions.”

“You’ve got more questions?” Biden replied. “Well, I tell you what, if you have a problem figuring out whether you’re for me or Trump, then you ain’t black.”

The Democrats will spin this in one of four ways (at least). None of them will be good for them.
Here are the answers to those spins.

1. It is probably true that Biden has dementia, but other that a trained medical professional, who could tell? Biden has been lying about himself and others and making racist assertions for nearly his entire public life. From a lay point of view, the only thing that’s different now than, say, in 2008, is that his ability to enunciate seems significantly impaired. If they admit this, they admit that he's a placeholder.

2. Oh, good luck with this one, Democrats! We on the right who happen to be black are used to this nonsense and to the obliviousness of those who assert it.

3. Hahahaha! Biden’s only knowledge about this comes from politically Democrat blacks like his former boss, as if he would know. And, as I said to the lovely Miss alexthechick, the notion that Biden has ever been able to comprehend a nuanced term like “politically black” much less use it properly is coffee-spewingly funny.

Interesting that this is the most forceful thing that 2020 Democratic Party presumptive presidential nominee Joseph R. Biden has publicly said in weeks, months or, possibly years other than threatening to punch a voter's lights out or calling another voter an "lying, dog-faced pony soldier."

He didn’t sound confused nor did he forget words or trip over them. He really believes this and will not see anything wrong with it.

And he will threaten to knock you on your ass if you tell him that he’s wrong and racist … unless your name is Stacey Abrams. But Miss Abrams will probably assert Democrat Spin #2 as listed above.

Assuming that Biden is picked as the Democratic Party nominee for president, do you think there will be at least one debate?

I do hope so. Something so rabidly entertaining has to come out of so dismal a year. I predict that it will mark a turning point.

“Hey Slow Joe! Do you think my friend over there, Dr. Ben Carson, is black? After all, he voted for me in 2016 and will vote for me again. What say you, Joe?”

Oh, let me compose the questions!


Every Tuesday and Saturday, I blog at the award-winning DaTechGuyBlog. Latest: My Wuhan Virus Regimen and Jackson's Party Trumps His Faith

When you hit the Tip Jar, it helps pays for: A Roof Over My Head, Food, Gasoline, Car Insurance, the writing of My Next Book(s), and Utilities--especially Internet and COFFEE! Yes, coffee is a utility.
Posted by baldilocks at 11:00:00 AM

I hope this is the end of him. I just am afraid of who the D party will put in his place.

Joe didn't get the memo that it's no longer 1985. He's surrounded by these SJW kids who couldn't run a lemonade stand, let alone a campaign.

Back when Hussein was picking Biden for VP, a good doctor friend who'd been a Doctor for 50 years, told me he can't believe BHO is picking Biden because he's had two cerebral aneurysms. He said most people don't survive one.

It's hilarious to watch him think he's "straight from the hip", "blue collar Joe who tells it like it is", but with the overton window, his mental problems, horrible campaign team, and just the collapse of the globalist Marxist house of cards in general, he has no idea what's going on. It's also funny to watch interviewers have to keep a straight face to pretend that he's to be taken seriously.

I'm actually thinking we need to lay off of Joe for a while until after he's officially the nominee, who could be worse or have a lesser chance of beating Trump?
OTOH, it seems the Trump Curse never fails, no matter what weapon they raise against him he ends up using it against them and making them wish they hadn't! Guy is the first creative GOP fighter since Newt Gingrich. They need to learn from his example!!