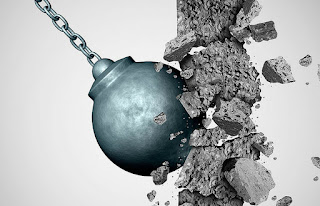 Around the right side of the political blogosphere, one can read years of posts and comments by many who excoriate Former President Obama for his displayed “stupidity” during his tenure. These people don’t get it.

Those who viewed the Obama Administration’s policies and programs and who observed President Obama’s obliviousness and lack of empathy in the face of on-going national crises and, as a result, made a summary low judgment of the president’s intellect do so with the premise that the man really was trying to improve economic, social and racial conditions in the USA.

That premise is wrong.

This is what people need to realize about destruction: it is the total opposite from building/improving. It seems like an obvious truth, but when comparing the concepts, we must take it further.

Construction of anything requires carefully ordered planning and implementation. For example, when constructing a solid, stable building, the architect recommends proven construction methods, using the right materials, and on a solid foundation. But before doing these things, the builder gains certain knowledge of the future purpose(s) of the building and, from there, makes his decisions on how to proceed.

Destruction, however, is not only opposite in purpose; it is so in methodology. (We’re talking malicious destruction here.) Using the building analogy again, think of what happens when someone blows up a building -- or flies an aircraft into it. Are any orders or rules to be followed for the goal to be achieved? No. In fact, the more chaos perpetrated by malicious destruction, the faster a building disintegrates. The same is true for a nation.

President Obama, the Democrat Party, and whoever sits behind the scenes sow method after method of chaos. And, in some cases, inaction is the chaos sowed.

They stab the giant known as the United States of America repeatedly, hoping that it will finally fall, hoping for utter destruction.

And remember: Former President Obama was the wrecking-ball, not the wrecker. The attempted takedown of America began way before he came on the scene. He is merely doing what a century of Gramscian infiltration designed him to do.

What we are seeing before our very eyes is merely escalation. And desperation.

Frenzy
Postmodernism and Her Babies
Rise, Take Up Your Bed, and Walk
On Your Mark; Get Ready.