Leaders and Soldiers of the Escalating War

It's not who you think it is

Several months ago, while I was perusing YouTube, its suggestion feature gave me an interview with a guy whose name I had never heard prior. I often watch Christian videos but tend to ignore many of the suggestions because there are more than a few crackpots out there claiming to speak for God. However, for some reason I listened to this one and was intrigued.

The interviewee – Michael Heiser – has a doctorate in Hebrew Bible and Semitic Studies and has an extensive resume in academia.

The upshot is that I bought the audiobook version of his book – his doctoral dissertation -- The Unseen Realm and listened to it, and then again. And I will listen to it again, soon. It’s not that it’s difficult to understand, but there is so much information.

His premise is called the Divine Council Worldview. A brief description of it is here.


The Divine Council is the view that Yahweh; The God of Israel is the Master of a pantheon, if you will, consisting of lesser gods who serve Him, carry out His will, and even deliberate with Him in decision making. Some of these members were assigned to the 70 nations listed in Genesis 10 after the Babel event, but they judged the nations they were assigned to corruptly, so God pronounced judgment on them that they would die like men. These gods became the pagan gods that Israel’s neighbors worshiped and who warred against God all throughout salvation history.

This is based, primarily, on these scriptures.


1 God [Elohim] standeth in the congregation of the mighty; he judgeth among the gods [elohim].
2 How long will ye judge unjustly, and accept the persons of the wicked? Selah.
3 Defend the poor and fatherless: do justice to the afflicted and needy.
4 Deliver the poor and needy: rid them out of the hand of the wicked.
5 They know not, neither will they understand; they walk on in darkness: all the foundations of the earth are out of course.
6 I have said, Ye are gods; and all of you are children of the most High.
7 But ye shall die like men, and fall like one of the princes.


8 When the Most High apportioned the nations as an inheritance, when he divided up humankind, he established the borders of the peoples according to the number of the sons of God.
9 But the LORD’s portion is his people, Jacob his allotted heritage.

There are many more references to these rulers over (gentile) nations in the Bible. The book of Daniel comes to mind.

Back in 2014, I wrote a long piece theorizing that people of black African descent were cursed with scattered thinking via two means – the curse of Canaan and the Tower of Babel.

I used the Bible and a short overview of history as evidence. Initially, I didn’t get too much feedback and one well-known troll of black conservative blogs postulated that I was crazy.

Over the years, however, people have run across the post and have received it well.

The only flaw in my thinking was the absence of a framework for the theory. Unseen Realm provides this.

My new conclusion is that black Africans are not cursed necessarily; it’s that we have long been misled by disobedient and particularly malevolent elohim and continue to be recipients of their deception when we are outside the boundaries of the Salvation of Jesus the Christ.

After reading the book – actually, I listened to it using Audible -- the pieces fell into place. It seems to me that the wayward elohim vary in quality as to how they (mis)lead their charges.

As mentioned above, there are 70 nations in this world. To modern ears, the word nation conjures what is properly called nation-state. But nation in the biblical context refers to ethnic groups. Some of these have developed separate languages, histories, customs, etc. over the centuries and consider themselves distinct from each other, but have the same spirit nonetheless.

Each nation has listened or hearkened to the corresponding spirit that rules over it and continues to do so. Those that rule over black Africans are the worst, in my opinion, and continuously lead us down the path of scattered thinking, degradation, and, ultimately destruction.

What we are seeing in front of us right now is an escalation of a war in the spirit world. The evil, disobedient spirits who have misled those of us of black African descent for millennia seek to rule over those who rule the other nations and to drown out the call of the Holy Spirit using long-seeded pride in our race. Therefore, those who are influenced by these spirits cannot abide the notion that all lives matter and react with rage when others assert this. To the unwitting, only black lives do.

This is why the war against white “supremacy” and “white privilege” is a thing. In reality, it is a war between Powers and Principalities.

(Whites are privileged but not in and of themselves. It's only in this manner: over the centuries, most of the white European nation-states and America have been under the influence of the Holy Spirit and have worshiped the Elohim of elohims -- Yahweh. Imperfectly, yes, but true nonetheless.)

(And it is true also that they have felt the misrule of their own disobedient elohim, as demonstrated by many things, including the continuous tribal wars in Europe and the genocide against many groups, most prominently of Yahweh's allotted nation, the Hebrews/Israelites/Jews. What do you think that the occultism of the Third Reich was about?)

This whole thing is the reason that the outrage goes far outside of the boundaries of proportion when a white person – especially a police officer – kills a black person, but not the other way around nor when a black person kills another black person. The latter two are far more frequent than the former, however, the disobedient elohim don’t care about black people dying and, therefore, neither do their human minions – as long as it’s not at the hands of “enemy forces.”

I must stress again that this is a spiritual war and that we – human beings -- are proxies for this war.

The more I think about it, it seems that all wars to take over land belonging to others are also manifestations of this spiritual war. After all, God allotted land and borders to each nation, but all borders and demographics have changed so many times that is a waste of time to keep count.

Here's another bit of framework:

Even black Christians hear the call to worship and please entities other than the Big Elohim and, without continuously reading the Word of God, meditating on it and acting based on it, he/she can be led astray because racialism -- Carcass Worship -- appeals to our pride. (Leading Christians of any nation astray is the primary goal of the Devil and his minions, the disobedient elohim.)

Dr. Heiser also points out that Jesus the Christ is the means for all to be released from the bondage of their particular disobedient elohim, to become Yahweh’s children and therefore members of His family. Steve Graham once pointed out that all Christians have Christ as our race and creed, which, if we are all members of Yahweh’s family, makes perfect sense.

Every single racial inflammation is war-related especially those which attempt to set one race over others.

The spectacle below is merely a pledge of allegiance to the principalities that appear to be winning. These people are preemptively surrendering. 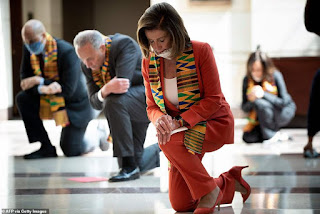 Of course, there is only one side worth being on in this war; the one that was victorious 2000+ years ago. The one whose Father picks His children from among all of the nations/races/tribes/ethnic groups  -- including His own allotment -- and makes them a part of one family.

But it is definitely time to pick a side.

I can feel for you my brother being Irish myself . I think my ethnic group also must have some demented kind of being persuading them into perversion . At one time we Irish/Scots were on fire and filled with the Holy Ghost but sadly now-a-days are a sexually perverted bunch of backsliders . Come quickly Lord Jesus !

And I am your sister.

So much is an interacting of patterns.

The more patterns we find, the more the world and beyond make sense.

Great article Juliette, you've inspired me to buy Dr. Heiser's book, plus a couple of his other titles. I, too, have felt the weight of "unseen forces" playing out in front of our eyes, and I promise if I ever call you my "brother" it will be only in jest, my sister!

This just keeps coming back to me to ponder...not done yet. Thank you for this perspective. I think you're courageous in the Spirit.

Thank you for sharing, I haven’t read the book you reference here, but to me it all seems to make sense just with the scriptures about not wrestling against flesh and blood, but against principalities, and powers and spiritual wickedness in high places ���� Can I just take a minute to say, I just had an “encounter” with something like this...except it’s not some protestor rioting on behalf of Antifa or anything like that, it’s in my own household...always has been �� What am I to do...I have prayed for this person for 13 years!!! I am tired of being his “punching bag” in the name of, “God hates divorce.” AND “I’m having enough faith that this is going to change.”...in the meantime my life has been a living HELL!!!

God bless and keep you, MissyC.

Very well-written and thought-provoking post. I'm interested in reading Heiser's treatise on the subject thanks to you. Keep up the good work!

I just discovered your blog, and really appreciate your post. I haven't seen a lot of talk about Michael Heiser's book, which I read shortly after it came out. In fact, I had forgotten that I read it...which I feel awful about because it discusses truths in the Bible that you don't hear about often....the "elohim". The Divine Council.

Wanted to share a couple contacts/online I believe you may really appreciate.

Looking forward to having coffee with you, either on the East Coast or LA.

Ugh, the above note sounds occultist.