It's always a pleasure and a blessing to be linked by Glenn Reynolds. My post, A Californian’s Day, received that honor. However after reading comments, I found that the Organized Left’s brainwashing efforts are quite advanced on the side of the Right. At least five commenters presumed that nobody approached me about a mask or lack of same in Trader Joe's because I'm black and female.

I responded several times that I know that black privilege exists, but this was not one of those situations. But I wish I had responded differently.

As I think about it more, I wish I had pointed out that race did not even belong in that conversation. I wish I had noted how too many of us on the right — we who have been complaining about the Organized Left and the mainstream media and others using the cudgel of race — have become what we hate.

It certainly isn't the first time I've seen white conservatives insert race into a conversation out of the blue and I don't feel offended or even sad about it. Why not? Because I've talked many, many times about how the Organized Left and its spiritual backers are shaping the battlefield for a coast-to-coast racial conflagration. And that battlefield begins in the mind.

Jesus himself said that, in the last days, there will be ethnic wars -- nation against nation. I've pointed out in other posts that the Devil is the prince of the power of the air, and that what he puts forth on this air that we breathe, on the air in which our missives travel back and forth via Wi-Fi, are lies. He also puts forth anger, misconceptions, misinterpretation, acrimony, and his specialty: fear.

As I said on Glenn's thread, sometimes it's about growing a pair, being brave and standing up for what you believe in and not about race.

In the original Californian post, I didn't mention that the young man who was happy to see my maskless face was white for one reason: it wasn't important. What was important was the fact that his eyes were open -- his intellectual eyes, possibly his spiritual ones and I wanted to share that.

Today I read two articles in which the authors outlined what a shit-hole California has become, especially in my city Los Angeles and in San Francisco. San Francisco sounds worse than LA, but maybe I need to get out more.

However, as a long-term result of more people opening their eyes, I expect good things to happen here. In fact, I’m counting on it.

What’s the revelation? The truth and the Truth. But, in order for those to reign, hatred and fear must be conquered.

Our minds must be renewed. 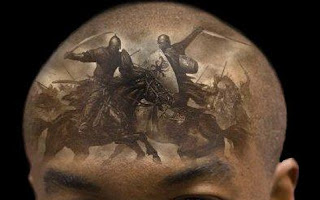 Thank you for your monetary and prayer support!

It saddens me that we've watched 'race' creep back into our lives over the past decade as it has. Race shouldn't matter but it seems too many grasp it first as their reason for why things happen the way they do.

Merriest of Christmas's to you dear Juliette.

My state (WA) dropped the mask mandates. And then reimposed them, because of course it did. Since the reimposition I have not worn a mask, save those very few times I have been specifically asked at the door. Which has been... two times, IIRC.

I'm not even sure I've received dirty looks from anybody. Sometimes another unmasked shopper and I will smile and exchange nods in passing. Now, I am in a red country in a blue state and it possible that most people recognize this as Kabuki theater and go along just to avoid trouble. I have taken a different course, and have so far not had any trouble.

Incidentally we do have Trader Joe's out here. And I have shopped in one a couple times, unmasked.